Tell me the truth!

As you know, on HiggsHunters we have been giving you not just real data images from the ATLAS detector. We have also been showing simulated images of what ATLAS detector events would look like if the Standard Model were extended with various new particles and interactions that would give displaced vertices. So what are these simulations of exactly, and why are they important for the science at HiggsHunters?

The simulations are of Z plus Higgs events, where the Z decays to a pair of muons (see last post!) and the Higgs boson decays to a pair of new, long-lived, neutral particles (called “a” bosons). Such a model is predicted by various theories which are possible extensions of the SM. These “a” bosons can then themselves decay, after some lifetime, back to SM particles. The parameters of this model are:

Since this is unknown new physics, these parameters are not known! But we can make some educated and motivated guesses based on theories of SM extensions and exclude values that would have allowed the “a” boson to be seen at previous experiments. For our simulations on HiggsHunters, we chose the following values:

This gives us 3×2+3×1=9 possible parameter combinations to simulate. We present a roughly equal number of all 9 on HiggsHunters. Below is an image of an event simulated with the parameters: “a” mass = 20 GeV, “a” decay to a pair of bottom quarks, and “a” lifetime = 100 mm. Since this is a simulation, we know where the decays took place – they are drawn on the image as pink dots. 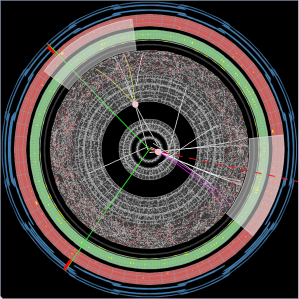 But when we give them to you on the site, you don’t get to see the pink dots! Wouldn’t that make life easier for you?! Well, yes, but the point is that by testing you all with these simulations we can measure your ability (efficiency) to have found such displaced vertices if they were to exist in the real data. This is very important for us to draw scientific conclusions from the results of the HiggsHunters project! (We also can’t show the pink dots to you right after you classify it, since each image gets classified by ~20 people. We can’t reveal the truth until after the image is done being classified by everyone! We could make the truth images available on talk at some point in the far future.)

If you all manage to find evidence for some new particle giving displaced decays, we need to know how often this process is occurring in the LHC pp collisions. (Well, we would also need to celebrate with some Champagne first!) How often it happens is given by how often you see it happening divided by your efficiency to see it happen. It is this efficiency which we can measure using the simulations, for each set of model parameters.

If instead you manage to go through all the data and find no new particles, we have still learned something very interesting! (No Champagne needed though, unfortunately.) We will have learned that these new particles are not being created at a rate that is large enough so that you would have seen them. This rate (for each particular set of model parameters) is very interesting to theorists who work on possible extensions to the SM and is given by about 3 divided by your efficiency to see it happen. So here again, these efficiencies measured with the simulations are essential. (In case you’re curious, the “3” in the formula above comes from the fact that to have at least a 95% chance of having at least 1 event occur, you need to expect about 3 events to occur on average. You can always just get a little unlucky and the events don’t occur even if on average you would have expected them to! For more info, read about the Poisson distribution. I also love this Poisson calculator – try typing in x=1 and avg. rate of success=3, you should see P(X>=1)=0.95!)

That’s it! Be proud that your abilities have been calibrated, and you are now ready to tackle the larger sets of real data we plan to upload to the site soon!